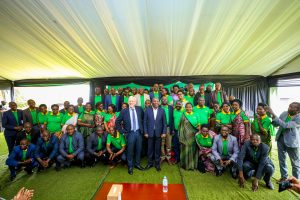 Five thousand smallholder farmers in Rwanda are now the owners of the country’s largest tea factory.

A ceremony, which was attended by the Prime Minister of Rwanda, the Right Honorable Édouard Ngirente, was held at Mulindi Tea Factory in Gicumbi, Rwanda, whereby shares in the Mulindi Tea Factory were signed over by The Wood Foundation Africa and Gatsby Africa, the philanthropic investors who had acquired the company when it was privatized by the Government of Rwanda in 2012.

This is the first factory to be owned 100% by smallholder farmers in Rwanda.

Sir Ian Wood, Executive Chairman of The Wood Foundation, attended the ceremony on behalf of the philanthropic investors. He said:

“It’s been a matter of great pride and satisfaction for Lord Sainsbury and I to work with the tea farmers at Mulindi.  It was difficult to begin with but with the investments and significant training programmes the farmers performance and their income have greatly improved.  We are very pleased to be handing over a well-established successful company and will continue to provide some support for an interim period.”

The Wood Foundation Africa and Gatsby Africa, through their investment vehicle East Africa Tea Investments (EATI), acquired majority shares in the factory when the Government of Rwanda privatized it 10 years ago. Since then, The Wood Foundation has invested in modernization of the factory, field expansion with high yielding clones, upskilling farmers and local management, Chairing the Company Board, providing corporate governance support, and diversifying the end market base into premium, niche markets.

Tea is an important crop in Rwanda, responsible for national revenue of USD93m in FY20, engaging a direct workforce of 60,000 people and supporting the indirect employment of a further 200,000. Smallholders dominate Rwandan supply of quality tea – the producer of some of the best black, CTC tea in the world due to its rich volcanic soil and unique climate.

“This is a historic event for the Mulindi tea farmers, and I am so happy to see this empowerment at the rural level.  As a Ministry, we highly value the critical importance of the small-scale tea farmers who represent 75% of the entire tea production in Rwanda.  To the farmers, I look forward to seeing continued growth at Mulindi, that the business maintains a high standard of professionalism and governance, and that it continues to act in the interest of its members.  I pledge the continuous support of the Ministry in this regard.

“To The Wood Foundation and Gatsby Charitable Foundation, it has been an exciting and demanding 10-year journey and we thank you for your support to small scale tea farmers.  Your exit from Mulindi business underscores your commitment to farmers’ empowerment, and your confidence in the people and country of Rwanda.”

A similar sentiment was conveyed by Omar Daair, the British High Commissioner to Rwanda, who said:

“This is a fantastic example of UK investment that improves livelihoods and increases exports of high-quality Rwandan tea. We are proud to be partnering with the Wood Foundation and the Rwandan Government in other parts of Rwanda on similar tea investments and are happy to see this pioneering handover in Mulindi today.”

In the decade since privatization a total USD 15m in financial and operational support has been invested in the factory by EATI, while farmer incomes have doubled in the same period. The factory has improved the lives and livelihoods of those living in the Mulindi region through the following achievements:

In support of the handover ceremony, Lord David Sainsbury remarked:

“After 10 years, the handover of Mulindi represents an exciting new chapter in a project that I’m delighted that Gatsby, my charitable Foundation, has been a part of.  I’d like to thank all those who have contributed to Mulindi’s success, particularly the commitment of the farmers themselves.  I look forward to following the factory’s progress and hopefully we will see more farmer-owned businesses in the region in the future.”

During the decade-long investment, the smallholder farmer cooperatives retained a 45% share in the factory. Mulindi is 100% supplied by the smallholders. It produces up to 4m kgs of manufactured tea and generates revenues up to USD9m per annum.

For additional information and a background briefing, please click here.